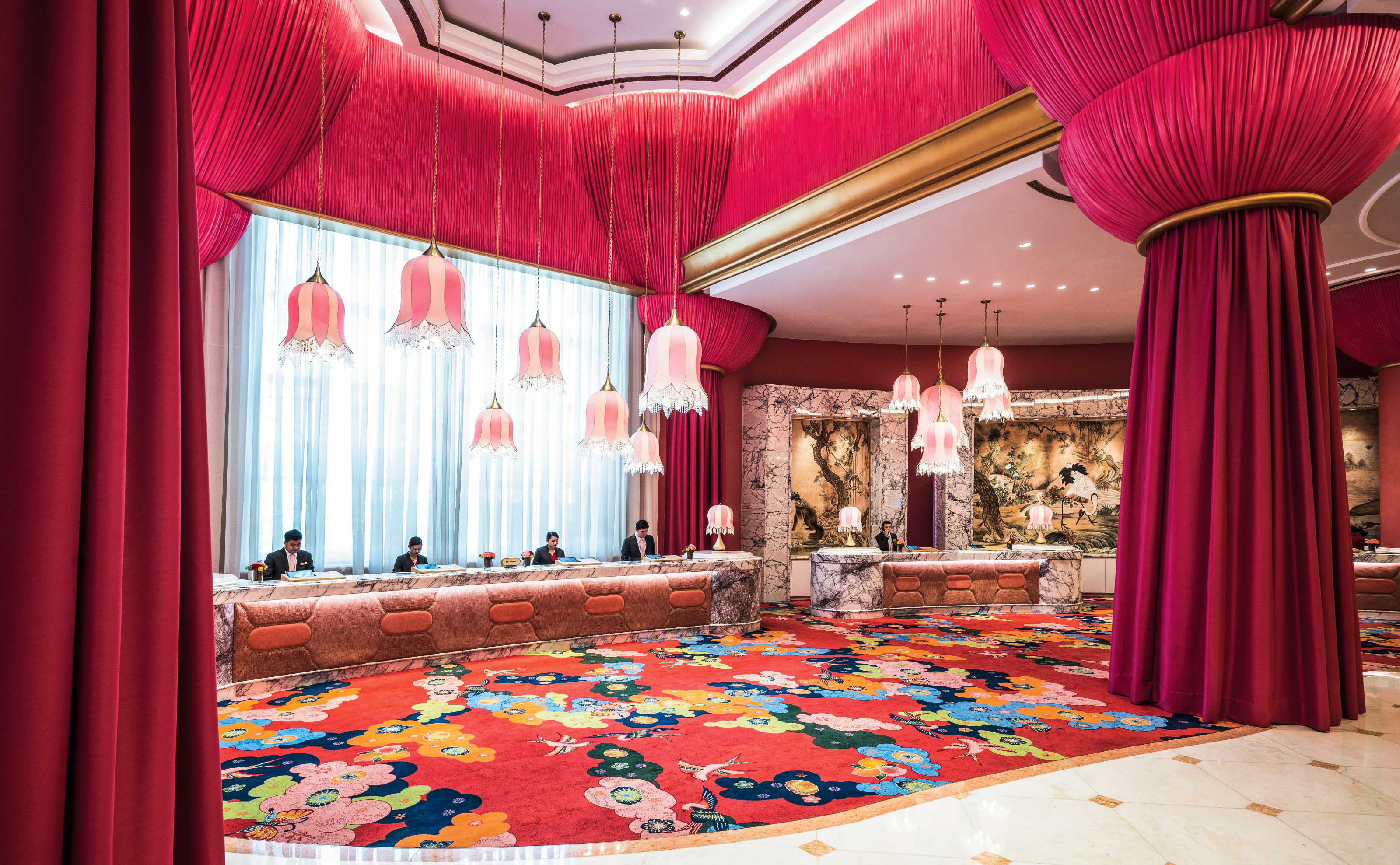 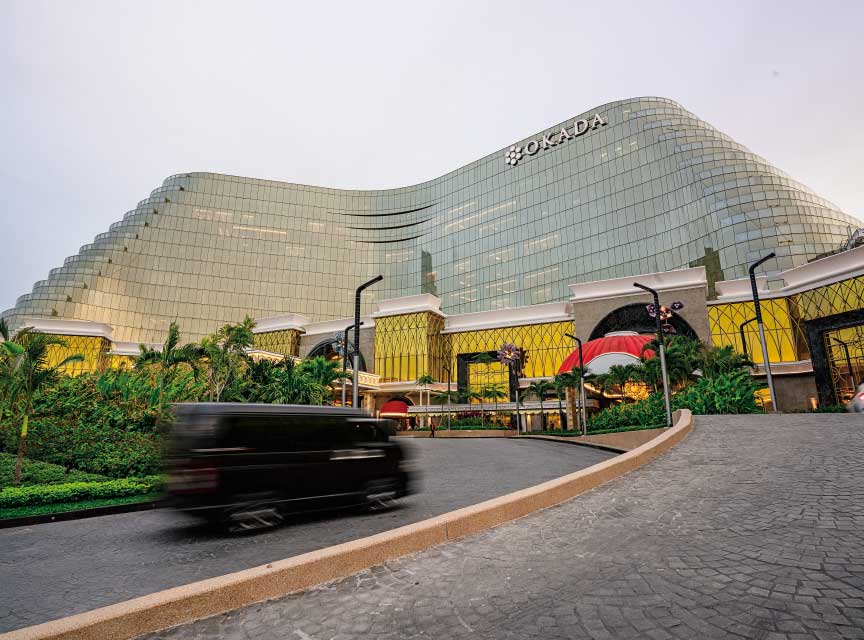 Architects Miurashin Associates cite the tropical blossoms of the Philippines as a prime inspiration for the décor.

Entertainment City, a ritzy stretch of coastline just south of Manila, hopes to eventually compete with Singapore and Las Vegas as an all-inclusive gaming and entertainment destination. Its latest addition, the multi-billion-dollar Okada Manila resort, is making headlines for its pyrotechnic fountain shows, as well as the flamboyant design of its 990-room hotel.

The lobby sets the tone for the hotel’s interior, and in choice of both colors and shapes, it’s unabashedly, gloriously over the top. The predominant hues are magenta trimmed with gold, as can be found on the huge columns that shoot up through the lobby like a giant forest of psychedelic mushrooms. These pillars are softened with ballooning pleats of shimmering cloth, which the designers also use on ceilings and walls, masking the structure of the building inside with more organic, undulating volumes. The entire area explodes with saturated color, from oversize floral wall prints to glittering turquoise paisleys. Unsurprisingly, architects Miurashin Associates cite the tropical blossoms of the Philippines as a prime inspiration for the décor.

The guest rooms strike a more subdued tone. While there’s still plenty of pink, especially in the Neo-Victorian furniture, the overall color scheme is balanced by neutral browns and blues. The bathrooms are light and airy, thanks to large windows and an abundance of rosy, beachy marble – both of which remind visitors that the sands of Manila Bay are just outside. INAX’s Satis shower toilets were built in at the special request of the resort’s Japanese ownership, who felt they were essential to meeting the high standards of »Japanese hospitality« at the Okada. In fact, Pan-Asian elements are a visual motif here, whether it be Chinese lanterns, Japanese painted screens, or traditional geometric patterns in the Korean dining room. Given that the resort intends to pull in guests from across the continent, the diverse design scheme offers a little bit of everything – and, hopefully, something for everyone. 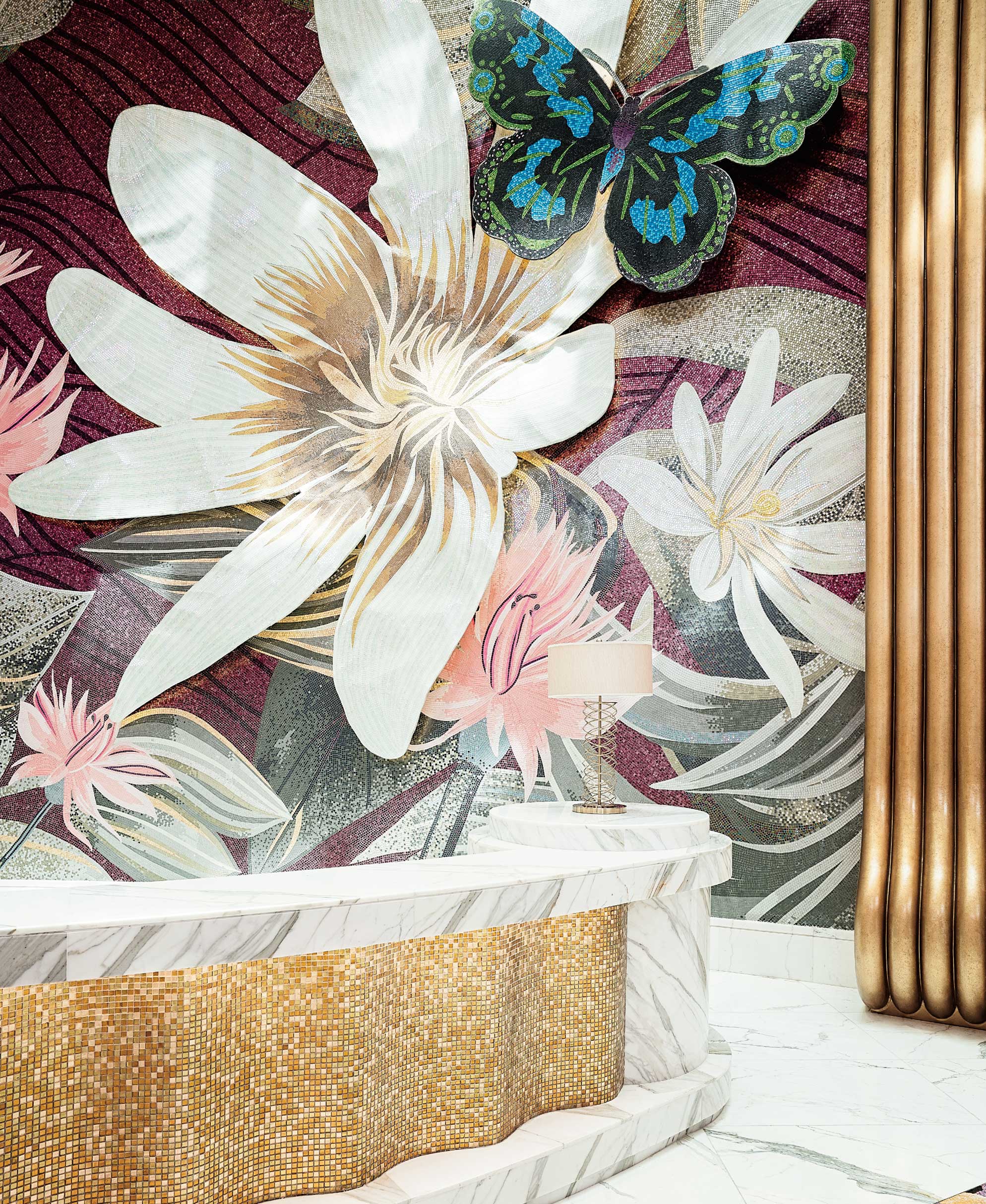 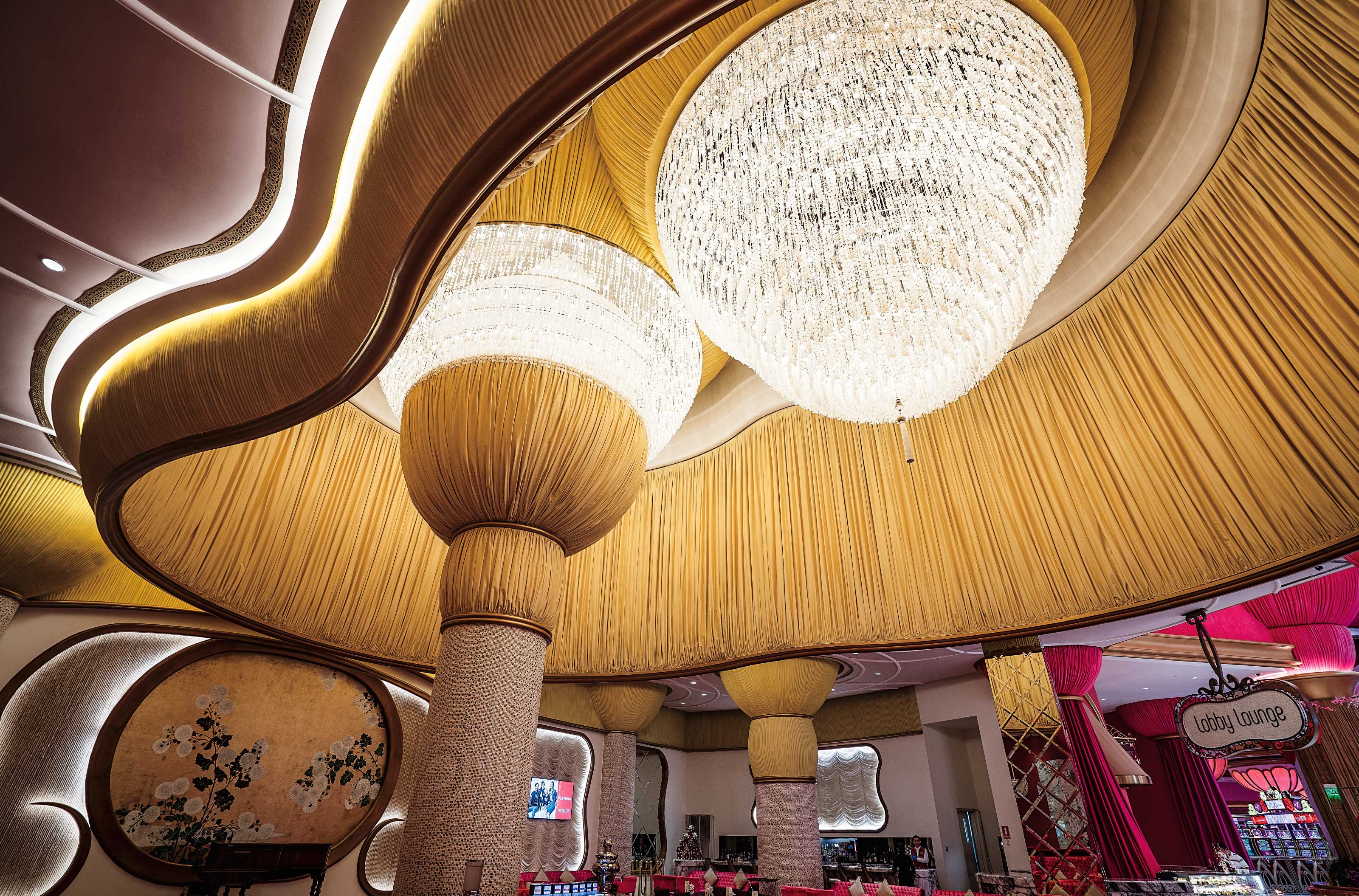 The lobby sets the tone for the hotel’s interior, and in choice of both colors and shapes, it’s unabashedly, gloriously over the top.

»The INAX shower toilets achieve a high level of function and quality at a reasonable cost.« 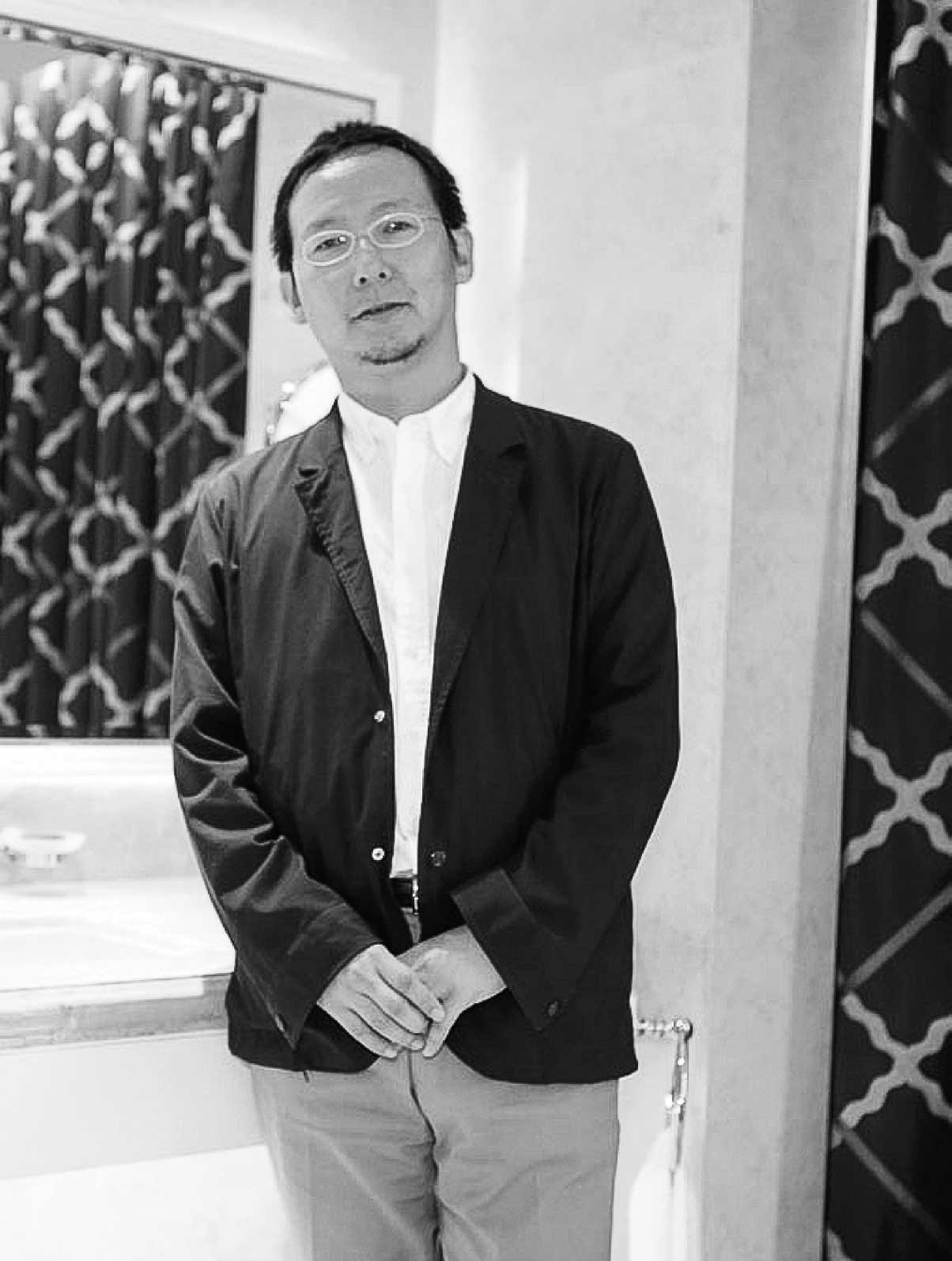 How do you approach designing the bathrooms for a place like Okada Manila?

Our main goal was for guests to really feel the natural light and scenery of Manila Bay. Bathrooms are an instinctively open space, because it’s where we are most naked. So it’s kind of intuitive to design them with that strong connection to nature.

What drew you to the INAX fixtures, and especially the Satis shower toilets?

Actually, it was the vision of the Japanese owners to bring in the best Japanese brands for the hotel – they achieve a high level of function and quality at a reasonable cost. The cleanliness of the washlets is an important part of the »Japanese hospitality« experience.

What ideas do you think will shape 21st century architecture and design?

Co-existence is the guiding principle of the 21st century. Last century’s design was focused on harmony – harmony as a means to creating equality. Now we need to find ways to co-exist in the midst of chaotic situations. 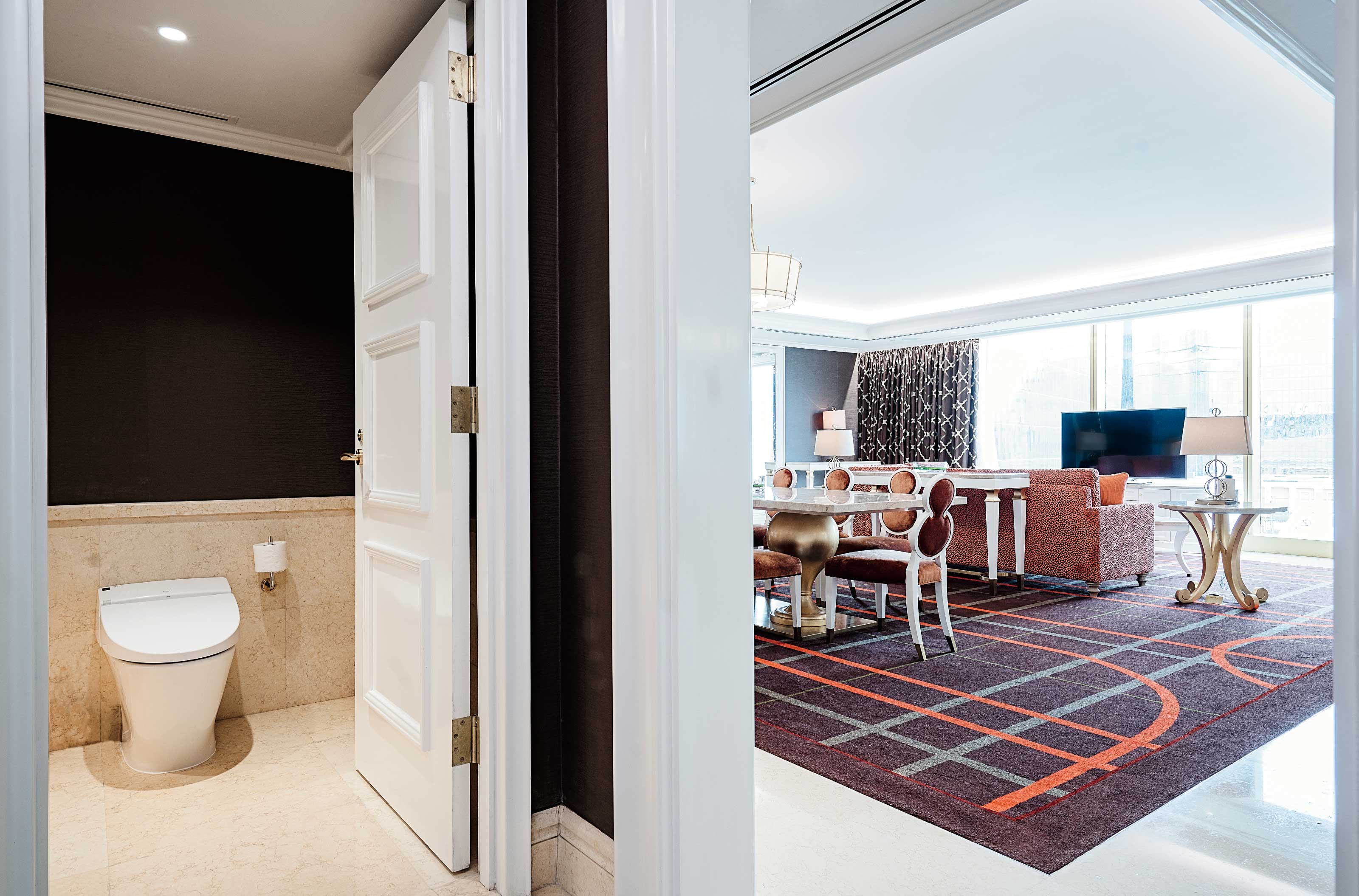 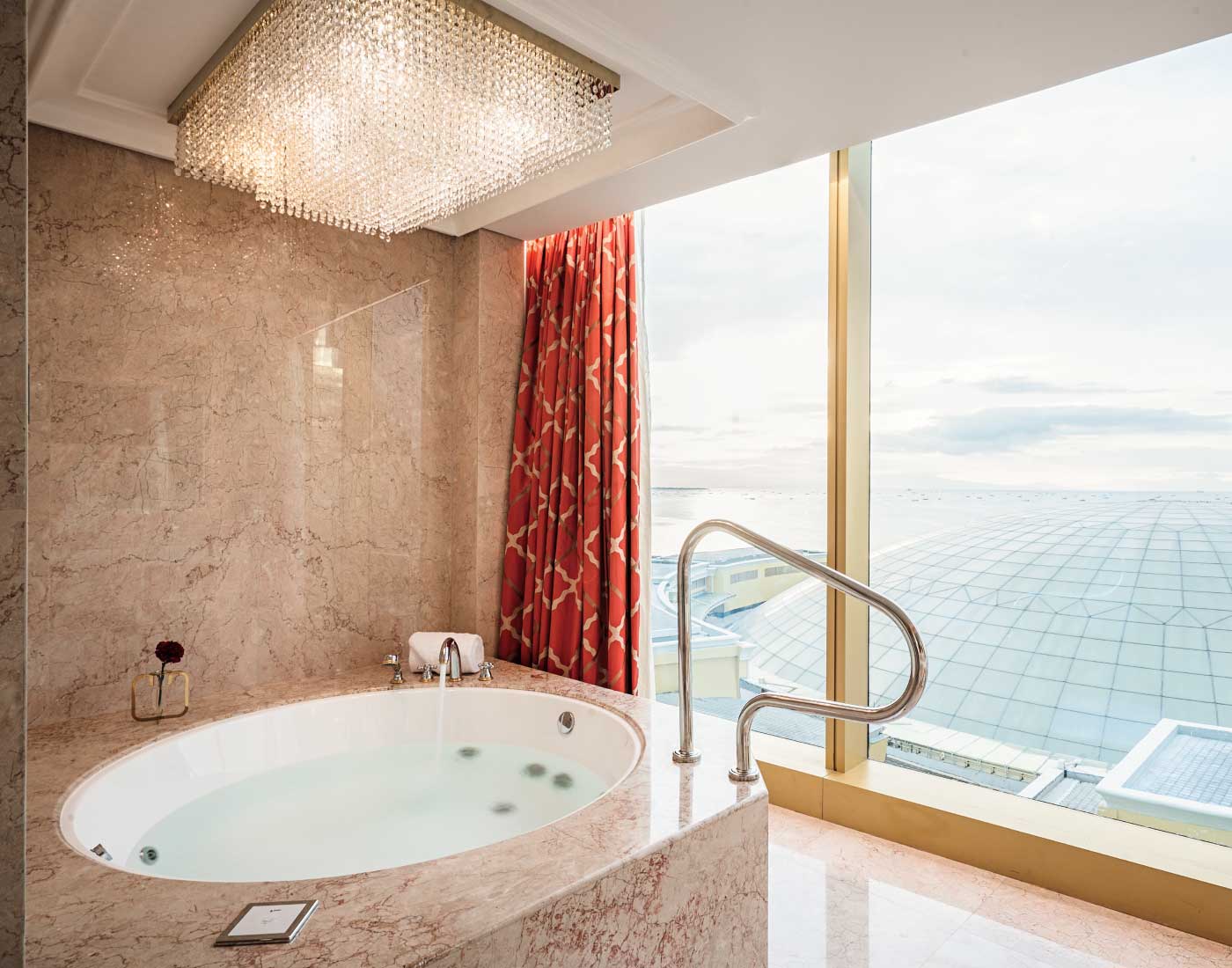 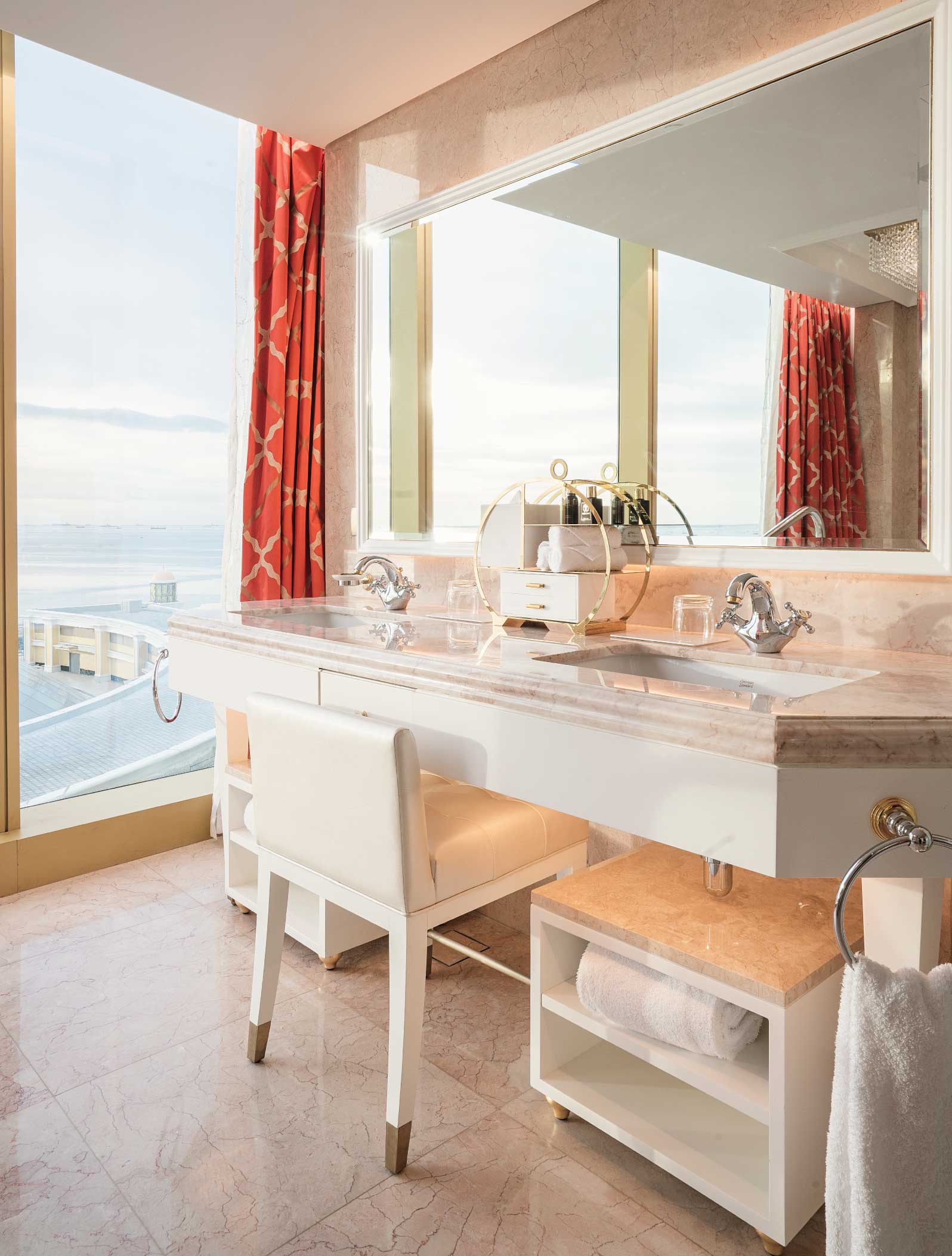 INAX’s Satis shower toilets were built in at the special request of the resort’s Japanese ownership, who felt they were essential to meeting the high standards of »Japanese hospitality« at the Okada.
Zoom meeting with our consultants